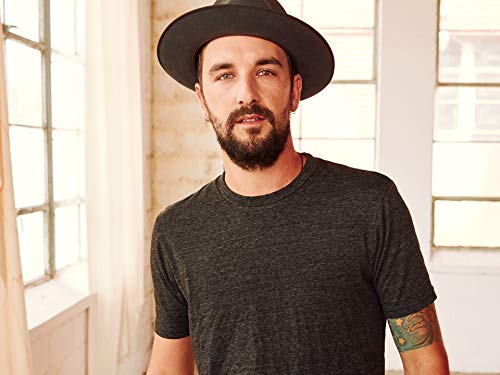 “I won’t be caged to the status quo. I’m not afraid to stand and say what people won’t.” -Rhett Walker

Now there’s an understatement. Rhett Walker is not like any rising Christian musician you have met before or will meet again soon. The outspoken son of a preacher was born and raised around the South, his mellow yet animated voice a sure mix of Georgia and the Carolinas. In that drawl, he tells an intense wild oats story tempered by God’s grace, a testimony that fuels the deep-fried rock and deep- down worship on Rhett Walker Band’s debut, Come To The River.

Indeed, Rhett is a shining example of faith, family, and country values today—an experienced man who teaches that grace comes with a calling, a clear message in his transformative single “When Mercy Found Me.” But nearly a decade ago, no one would have predicted as much.

“We moved away from my hometown when I was 16, and I didn’t like that. I just went nuts, doing whatever I wanted to do in the moment,” he says. “I mixed with the rough crowd, got into fights and drugs. It wasn’t long before I was expelled from school—just always in trouble. So they sent me to this Christian school, the only one that would take me, and I met this girl. It wasn’t long after that we found out she was pregnant. That was the stop in the path for me.”

Walker grew up in church; he knew the answers to the questions on Sunday morning better than other kids. He’d gone on to play drums in the praise band, too, but generally just stopped caring. Presented with a ton-of-bricks reality at 17, Rhett could stay on the downward spiral or step up.

“It was like, Man, what am I doing?” he remembers. “I’ve still got my senior year left, but I’ll have to leave this religious school where I’m high most of the time anyway. My girlfriend’s having a baby, and I have no job. I finally sat down with April, who is now my wife, and said: We’ve done everything wrong that we possibly can. Let’s do everything right from here on out.”

Rhett and April got married. He rededicated his life to God, and she accepted Jesus for the first time. He got a diploma, and she made their $300-per-month apartment into a home. They welcomed a daughter, Rileigh, and became active in church where Walker began leading worship.

As they matured in faith and expanded their family (a son, Jett, was born two years later), a growing number of opportunities for Rhett to lead worship at other churches and on college campuses helped him let go of his construction and factory work. It was a dream come true.

‘I always knew I wanted to do music, but I couldn’t sing as a kid; I was just terrible at it,’ he says with a trademark matter-of-factness that is charming and disarming. ‘So I was a drummer at church growing up until one day they called me out front to sing ‘Grace Like Rain’ by Todd Agnew, and I never went back to the drums. The more I sang the more things started opening up.’

With a bold trust in God that most people—let alone teenage parents—don’t exhibit, Rhett and April chased this calling laid on his heart to pursue music and songwriting. First, they moved six hours away from the security net of local family and friends for him to take a conference-based worship leader position. After that, the next stop was Nashville, where Rhett Walker Band and the grace-themed, movement-inspiring songs for Come To The River would begin to take shape.

“I’ve loved covering Passion songs as a worship leader, but I feel like some of the crazy things I’ve done and need to sing about don’t always fit that mold,” he explains. “So I want to write music that isn’t really congregational worship but still inspires a movement that champions what grace really is. That’s what got me excited about coming to Nashville and doing an album.”

It wasn’t long before his music won independent songwriter contests and gained the attention of Provident Label Group (Third Day, Casting Crowns), who signed Rhett to Essential Records knowing that his no- bones Christian message would reach the heart of the industry as well as the rough edges.
‘There’s just nothing we can do without grace; we’re all dirty, messed up people, but Christ still loves us,’ he says of the drive behind Come To The River. ‘So there’s two things we must do. One: rejoice, because now we have a purpose on this earth—to share that grace with others. Two: take up the calling. You can’t just take that love and not tell the story that goes with it.'”